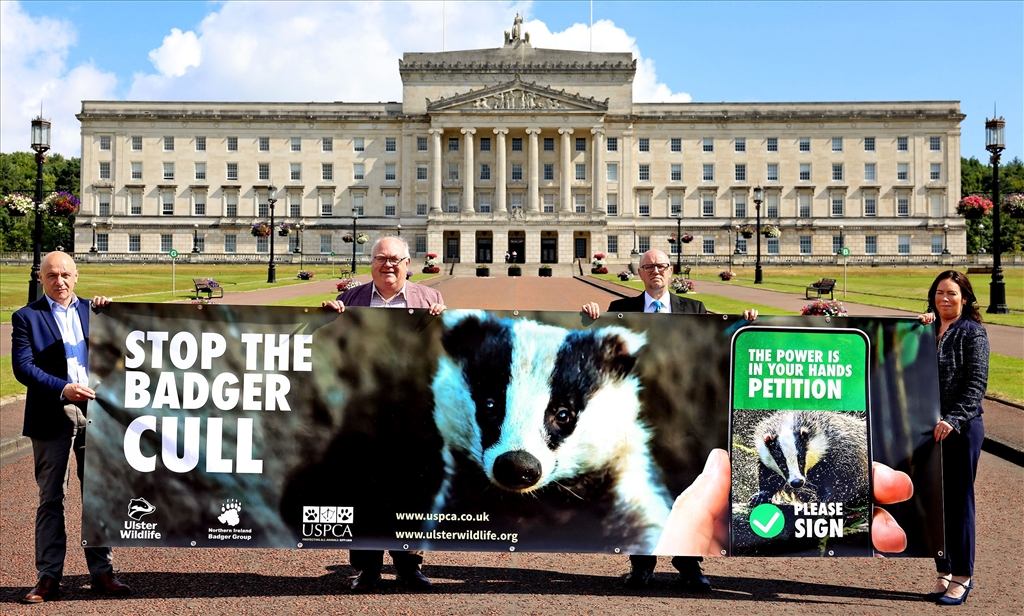 The USPCA, Ulster Wildlife, and Northern Ireland Badger Group have joined forces to launch a petition in opposition to DAERA’s recently proposed badger cull as part of its bovine TB eradication strategy.

The Department’s strategy favours the introduction of an indiscriminate badger cull using controlled shooting of free roaming badgers, delivered and paid for by farmer-led companies. The native species has been under the protection of the law via the Bern Convention for 40 years.

Badger culls have been implemented in England and the Republic of Ireland in recent years with the only lasting result being the loss of hundreds of thousands of badgers and minimal impact on Bovine TB levels in cattle.

Speaking at the launch of the petition, Alliance MLA and Chair of the All Party Group on Animal Welfare, John Blair said: “Whilst I am supportive of many of the measures proposed by DAERA to combat the disease, I strongly oppose intensive badger culling, which would lead to the destruction of protected wildlife on an unprecedented scale.

“There is little to no evidence to suggest that an indiscriminate cull of badgers in Northern Ireland would be an effective approach to controlling the spread of the disease. I am, also, disappointed more ethical alternatives to controlling bovine TB, in both the badger and cattle populations in Northern Ireland, such as cattle vaccination and ‘Test–Vaccinate–Remove’ (TVR) have not been proposed.”

“I urge the public to add their voice to this campaign to Stop the Badger Cull by signing the petition.”

Ken Brundle, Chair of Ulster Wildlife, said: “At a time when Northern Ireland is the most nature-depleted part of the UK, to propose removing thousands of this keystone species from the countryside is completely unacceptable. There are alternatives to the indiscriminate killing of Bovine TB-free badgers, primarily through taking a badger vaccination-led approach.”

Brendan Mullan, Chief Executive of the USPCA, stated: “4 out of 5 badgers in Northern Ireland are healthy and there is therefore no justification for an indiscriminate cull. The slaughter of healthy badgers as outlined in the consultation document is unjustifiable and morally wrong. If a wildlife intervention is to be part of the strategy, it should follow a test, vaccinate or remove approach, which has been shown by DAERA’s own research project to be effective.”

Mike Rendle from the NI Badger Group commented, “Culling is an outdated practice with an unfounded promise of results. The Westminster government’s own Independent Expert Panel branded the recent culls in England ‘inhumane and ineffective’. We are appealing to the public to join us in challenging the cull of healthy badgers, as outlined in the consultation document, by signing our petition today and also sharing their views via the online consultation.”

Please sign the petition by clicking the image below: