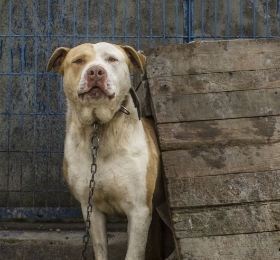 Animal fighting is a terrible form of animal cruelty where animals are pitted against one another for ‘so called sport’ Despite it being banned for over 185 years, the barbaric activity is still prevalent across Northern Ireland.

Dog fighting is one of the most brutal forms of animal cruelty. The dogs forced to engage in this activity, usually of the Pitbull type, are trained to fight and are set upon one another with the aim of imposing as much pain as possible. Revellers of the sport will place bets on the animals involved with the odds often including the outcome of death in the ring. Rules apply and large sums of cash are wagered on the outcome of the fight, a horrific fight that can last from between 30 minutes and two hours. Sadly, many of the dogs will be killed either in the ring by their opponent, after the fight as a result of their brutal injuries, or in some cases, by their owner.

Winning dogs have huge values to the perpetrators of this vicious blood sport, individually as fighters and in the breeding blood line. Owners are driven by the blood lust of the fight and the status involved with owning a winning dog – not to mention the volume of money involved. Meanwhile, losing dogs are of no further use and are killed with zero hesitancy.

All dogs intended for fighting are subject to excessive training regimes, almost always involving a treadmill and weight collars. These dogs are reared in such a way to incite hostility and aggressiveness and are often ‘blooded’ using smaller animals such as rabbits or cats – which are often purchased cheaply online or stolen. Horrifically, Northern Ireland has had exposure to this activity in a recent case where perpetrators shook a cat from a tree, allowing it to be attacked and killed by a dog below.

Linked to other forms of animal cruelty, such as fox and badger baiting, and other forms of criminality, dog fighting is underground in its nature. The fights usually take place away from the public eye in quiet, private locations and the dogs involved suffer grave injuries to their head, ears, front legs and chest, and suffer severe scarring. Dogs with serious injuries are typically not brought to a vet for treatment and are instead ‘treated’ in a haphazard way, often without anaesthetic.

Dog fighting in Northern Ireland was dealt a major blow in 2007 when BBC Spotlight exposed the principle dog fighting ring known as ‘The Farmers Boys’. Remnants of this ‘sport’ have since gone underground but unfortunately there is evidence that it still continues in the region, but on a smaller scale. In 2020 and 2021, the USPCA had seven reports linked to dog fighting. One of those was the discovery of a dog’s body in a dump which had clearly died from injuries incurred in dog fighting.

Cock fighting operates in a similar way to dog fighting, where cockerels are bred specifically for fighting and are trained using practice birds.

With the aim of inflicting as much damage as possible, the owners place metal spurs – sometimes with attached spikes or blades – to the cockerel’s natural spurs. The birds are placed in the ring and forced to fight until the death, or critical injury. The length of fights varies greatly from as little as a few minutes, through to an hour or more – depending on the nature of the spurs used. ‘Losing’ birds are often discarded or destroyed, even if they are still alive.

If you have any knowledge regarding animal fighting in Northern Ireland, please report it today.